The brain is able to flexibly respond to incoming stimuli, shifting its response patterns to best suit the current situation. My research has been focused on understanding the neuronal mechanisms that mediates this flexibility. During my PhD I worked at Newcastle University with Alex Thiele to show that the effect of attention on V1 neurons is dependent on the neuromodulator Acetylcholine. We even showed which specific receptor type was most involved; the M1 muscarinic receptor. After completing my PhD I joined the De Weerd lab in 2006 where we planned to perform similar experiments in the domain of learning, and also study extrastriate areas V2 and V4. One of the central ideas was that learning and attention would implement changes in oscillatory synchronization between the different areas. However, we quickly found that the dominant ideas about how synchronization worked were not at all correct. Together with Eric Lowet, a PhD student, we developed a new theory of how synchronization can work given that biological oscillations are not stable but rapidly vary in frequency. We are now testing if this theory can be extended to include many oscillation bands and many different brain areas. While most of my work has been in animal models, primarily macaque monkeys, I now work only in humans, gathering invasive electrophysiology from patients implanted with ECoG for epilepsy monitoring or micro-electrodes for Deep Brain stimulation in Parkinson’s and other neurological diseases. This set up allows opportunities for fundamental research into attention, learning and language processing, and for applied clinical research, for example into epilepsy care and effects of anesthesia on single neuron behavior. 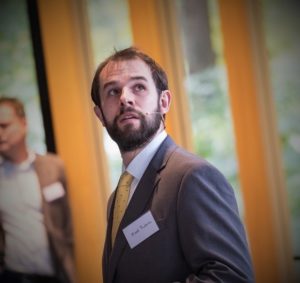